Tony Ortega has been an artist for over 36 years, creating vibrant, colorful works that explore the culture, history and experiences of Chicanos/Latinos. He is a soft-spoken man with keen eyes that take in the details of seemingly mundane scenes, transforming them into brilliant and meaningful depictions of cultural hybridity in modern American life.

Ortega’s home-based studio is lined with filing cabinets filled with his art, everything in order, centered around a small printing press he uses to create etchings. The walls are covered with iterations of his work from various points in his career–bright prints of latino men on bicycles, or etchings of “Super-hombre”–a Chicano rendering of Superman. Ortega’s work has been shown extensively in the US and abroad, and can be found at the Denver Art Museum, Los Angeles County Museum and the Colorado Springs Fine Art Center.

Art Gym’s Development Director Julia Dillard caught up with Tony to learn more about how he creates, how he became an artist, and some of the major themes in his work. 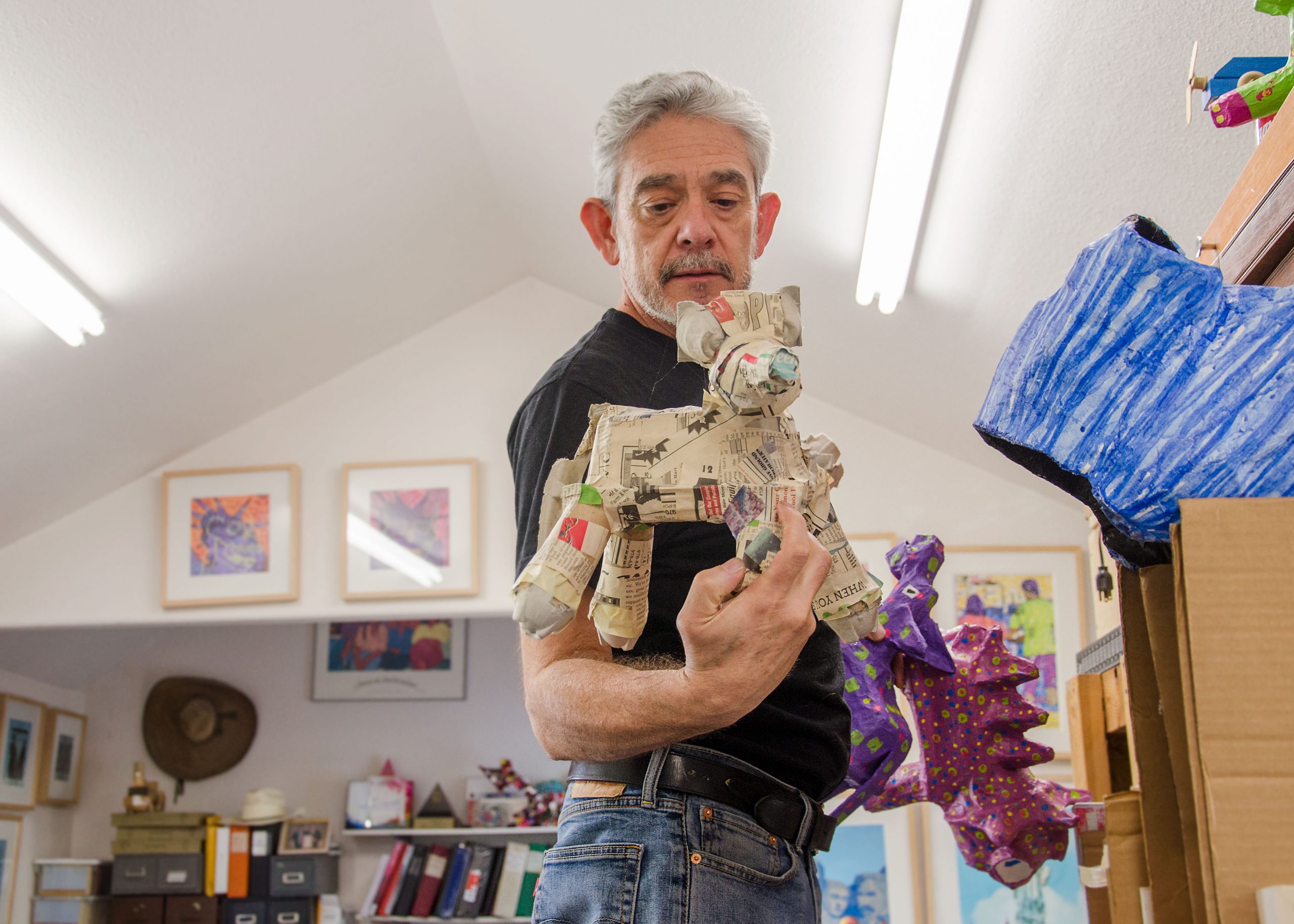 “Ideas don’t usually come when I say “I need to think of something.” Usually epiphanies happen when I least expect it…The thing is when you have those epiphanies you have to remember them!”

Julia: It strikes me that you’re such an experimenter, always playing with different techniques and mediums. Is that something you’ve always done?

Tony: I started experimenting more when I became a professor and a teacher, actually, but I think I’ve always liked it. There’s an assignment I give to my students where they have to create using “alternative mark-makings”–it can be anything from splattering, dripping, squeezing, collaging, transferring, just to get them out of the box.

Julia: How long have you been an artist? What was the “beginning” for you?

Tony: My maternal grandmother used to watch me when my mother went to work, and she was a seamstress. She did everything from clothes to alterations, to making quilts. So as a little kid I would bother her for thread and materials and I’d start making. My uncle who lived with us for a little while was a carpenter, and I saw him as kind of a father-figure, so I thought “Oh, men make things with wood!”. I think it made me want to be a creative person, although back then I don’t think I equated that with being an artist, I just thought of it as making.

Julia: How did you transition from that into thinking “I could be an artist.”?

Tony: In 7th grade I did odd jobs to make money. I’d shovel snow, and do lawn jobs and gardening. I met this guy in the neighborhood named Ramon Kelley–he’s a portrait painter, but he also does romantic southwest scenery. I worked for him and I saw him as an artist, and through him met other artists like Rudy Gallegos and John Galvin. So as I grew up I got to meet a lot of artists.

“My uncle who lived with us for a little while was a carpenter, so I thought “Oh, men make things with wood!”. I think it made me want to be a creative person, although back then I don’t think I equated that with being an artist, I just thought of it as making.”

Julia: Right, so you were exposed to artists and started thinking “Maybe that could be me.” Then you studied art in school, right?

Tony: Well I went to CU Boulder, but I didn’t really like the classes. Especially as a freshmen and sophomore the classes were so conceptual, and I was more concerned with the action of making art than the theory of how to draw, color theory, perspective and those kind of basic skills, the “grammar of making art”. It kind of lost me, so I ended up majoring in business and Spanish. Then I got a certificate in American studies and went and lived in Mexico for a couple semesters, took some anthropology, history classes, and archaeology classes. When I came back I finished at CU, then went to RMCAD. It was a great school because everybody who taught there was a professional artist, so I got an associates degree there and built up my skills. That’s when I decided I was going to use my business skills to become a self-employed artist. I did that from the time I was 25-45. I’m still an artist, but when I was 45 I became a professor at Regis. And I also went to grad school in-between.

Julia: That’s so interesting, I think it’s uncommon for an artist to have a background in business. How did your business knowledge serve you in creating your self-sustaining career as an artist?

Tony: It gave me the skill set and context to take my work out there, skills in marketing, accounting, management. Essentially artists either provide a product, or they provide a service. Products would be prints or drawings or paintings. And then a service we can provide, obviously one of them is teaching, or sometimes you can sell reproduction rights for album covers or books or something. So when I was self-employed I had to combine those two skills of teaching and selling my artwork. It was a lot of work, haha.

Julia: What did you study in grad school?

Tony: I went back for my MFA in drawing and painting.

“I’ve been making these hybrid images, pulling images from popular US or western culture and mixing it with popular culture from Mexico and Chicano culture. Not only are they hybrid images but they also combine a sense of humor, sometimes a little bit of social/political statements – sometimes I don’t even know what they are saying.” 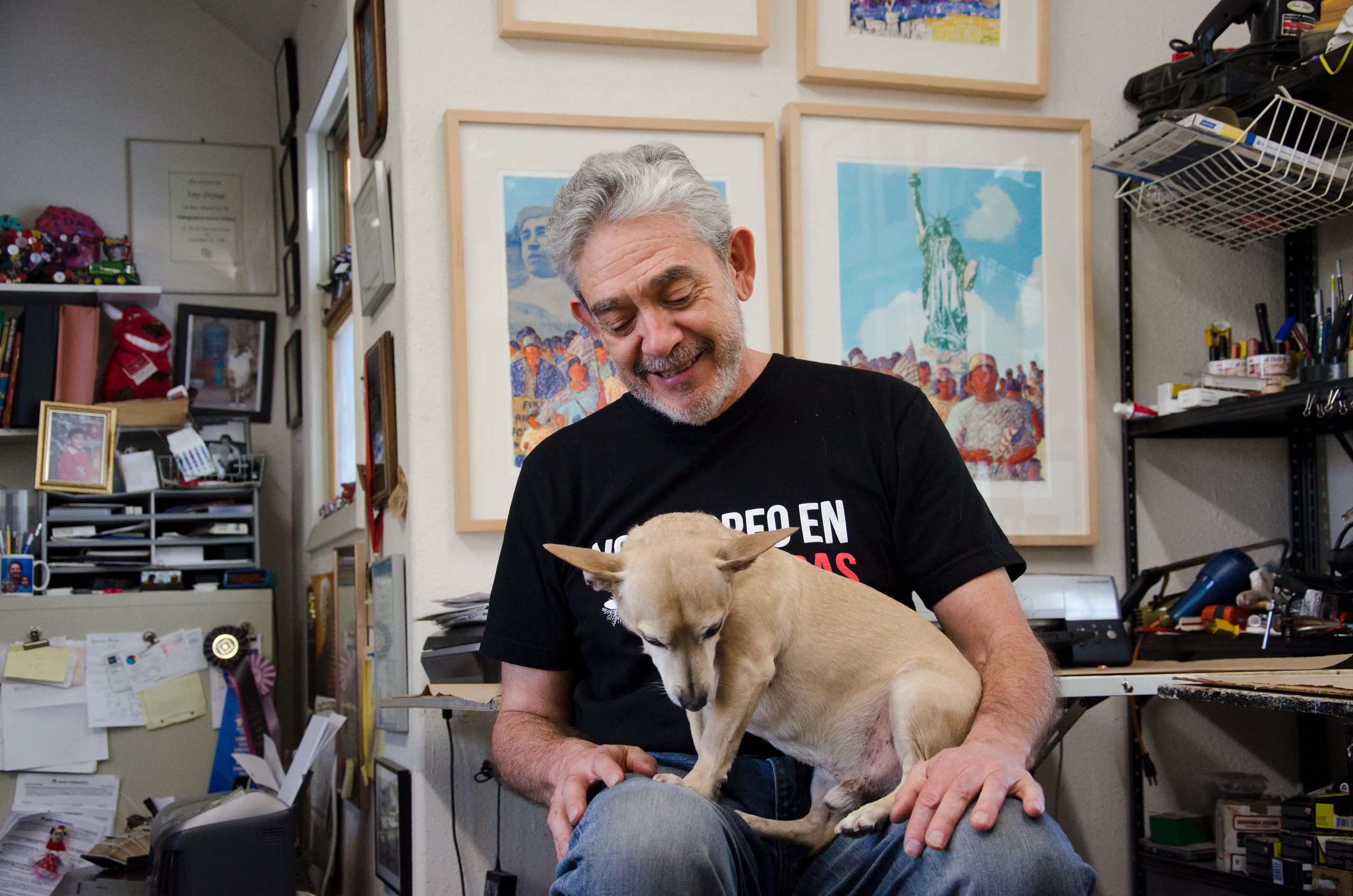 Julia: Were there any major influences on your work in terms of your aesthetic, like an artist or mentor?

Tony: Biggest influence was my teacher Jim Velone. I read a book in art school called “The Art Spirit” by Robert Henri. When Jim spoke he reminded me of that author. I think splitting my time between Mexico and Denver also impacted my work. When I lived in Mexico for a year, I learned a lot about the civil rights and Chicano movement, which were happening as I was growing up. Then of course growing up in a bi-lingual and bi-cultural family has shaped a lot of my work as well.

Julia: Do you have a particular piece or body of work that you love that you’ve created?

Tony: That’s always a hard question to answer. There was a piece I did in the early 90‘s that was a backdrop for a TV set. The show was called Tele-tunes kind-of a precursor to MTV. They’d have a VJ and they would talk about the song or artist and they asked some artists to create backdrops for the VJs. I created a 8×12 three-panel piece that was a collage that incorporated things from popular culture. I think that piece influenced the direction of my later work.

Julia: Tell me a little bit about what you’re currently working on and where you’re headed.

Tony: For a number of years I’ve been making these hybrid images, pulling images from popular US or western culture and mixing it with popular culture from Mexico and Chicano culture. Not only are they hybrid images but they also combine a sense of humor, sometimes a little bit of social/political statements – sometimes I don’t even know what they are saying.

Julia: Your work does have so much humor and lightheartedness–how do you decide which images to overlay? Is it calculated or more of an intuitive process?

Tony: Ideas don’t usually come when I say “I need to think of something.” Usually epiphanies happen when I least expect it, like when I first wake up in the morning, in the shower, riding my bike, drive down the road (I mean I shouldn’t be having epiphanies when I’m driving, haha) but usually when I’m not in a creative mode, and my mind just wanders or is relaxed, something like that. The thing is when you have those epiphanies you have to remember them!

Julia: The hybridity and mixing of cultures in your work is so interesting. I was reading a study the other day that soon the US is going to be a minority-majority country, so 51% of the population will be part of a minority group. I look at your work and it feels very timely and relevant. Do you feel like your work is a reflection of something you are observing in the US cultural landscape?

Tony: Yeah I think on some level my work is a reflection of what’s happening. Expressing what it’s like to be part of a country that expects you to blend in or melt into or become part of, and at the same time exploring how you as an artist or an individual or community or any group still retain some of your traditions, culture and identity. Obviously who I am is different than my mother and her generation, or my grandmother and her generation, that’s their context, so I like to think that my art on some level reflects that. I think my work comments on cultures and how they blend and merge, or juxtapose and overlap. Sometimes they merge, sometimes they contrast, and sometimes they don’t make any sense.

Julia: That’s so true – I think that’s why imagery is such a powerful way to explore these lived experiences, because words aren’t always enough. 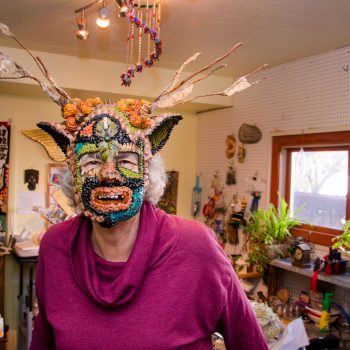 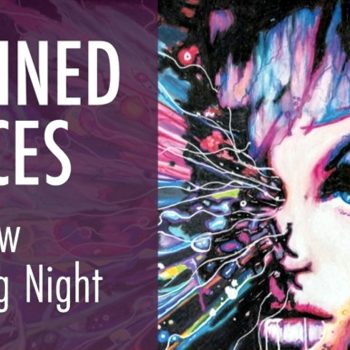