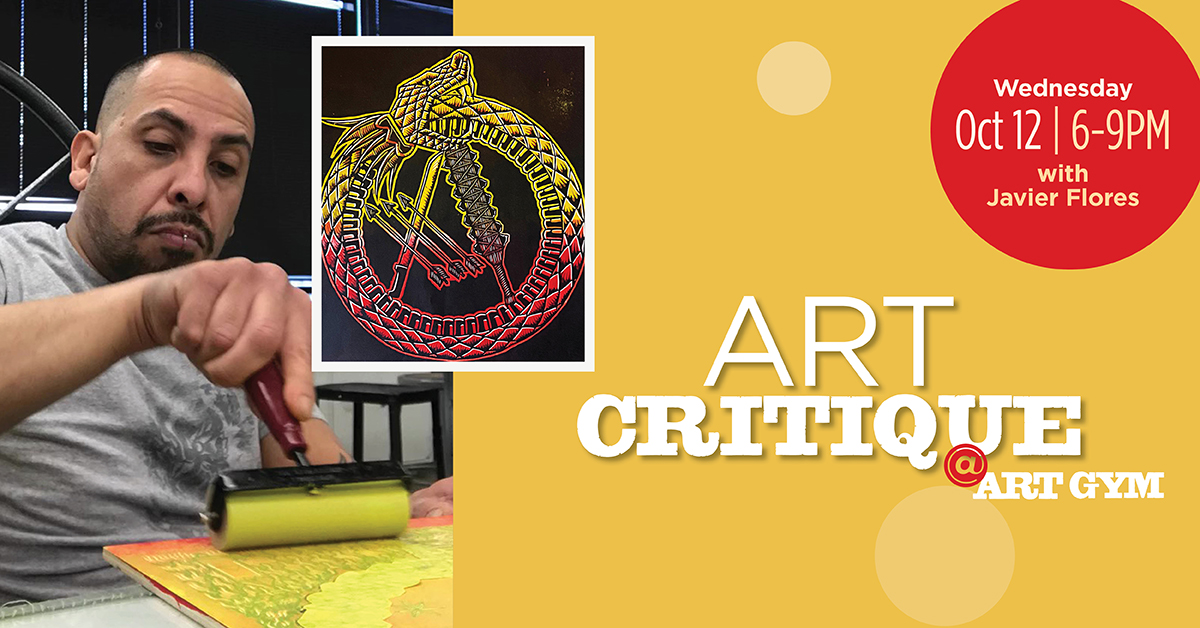 Come join this informal critique moderated by artist Javier Flores alongside Art Gym staff on Wednesday October 12 from 6-9PM. Critiques are free and open to the public. Bring some pieces of work to have critiqued by the group, or join in on the discussion even if you don’t have work to share.

Maximum of 12 participants. Beer and light snacks will be served!

Born April 27, 1978, in Denver Colorado to Mexican immigrants, Javier Flores is the eldest of 3 kids. Raised in a blue collar, middle to low class household in Brighton, Colorado helped to instill a strong work ethic, honesty, and integrity. At the age of nineteen Javier was shot in the lower back and subsequently paralyzed. Initially in shock and depression he became distant and suicidal for a time, only to be saved by family, friends, the visual arts and martial arts.

Flores received his Bachelor of Fine Arts from Metropolitan State University of Denver in 2008, and his Master of Fine Arts from Texas A&M University Corpus Christi in 2017. Since graduating, he worked as an adjunct affiliate until recently acquiring a full-time position at Front Range Community College. He also continues to be affiliated with Access Gallery, and Museo De Las Americas, all while continuing to pursue his artistic career.

As an artist, Flores chooses to associate with the idea of Lenguaje Vulgar, or vulgar language, a reference to cussing in Spanish. The connection of imagery to language is a symbolic reference to the visual lexicon he continues to expand to explore the daily hindrance of his disability among other issues. The implication of swearing or cussing in accordance with his art, is a therapeutic tool which allows Flores to express frustration yet persevere. As a visual artist, Flores pursues a variety of mediums to best translate the biographical narrative approach to image and form making.  By re-contextualizing common symbols, the viewer is led to a larger dialogue in which they must access their own personal context in relation to the art. The reflective aspect of Javier’s work is an exploration into identity in the form of culture, ecology, masculinity (non-toxic), politics, temporality, loss and ultimately triumph.