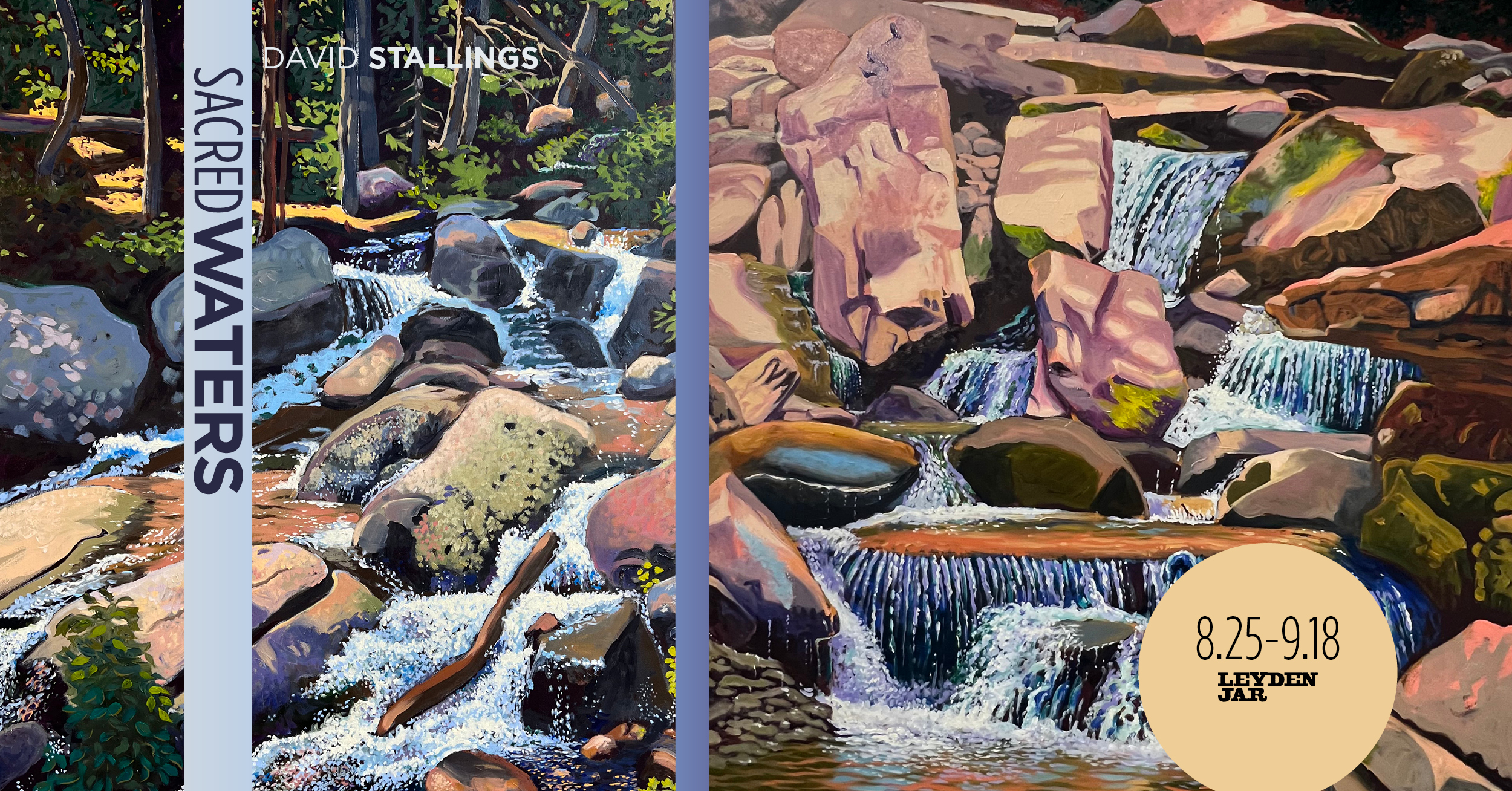 Art Gym is excited to present Sacred Waters, a solo exhibition of new work from member David Stallings on view in The Leyden Jar. Please join us and the artist for a reception on Friday September 9 from 6-9PM.

“I have lived in Colorado since 1980, a state where two tectonic plates are pushing together and forming the Rocky Mountains. At fifty-four locations along this mountain range, peaks have risen to an elevation of 14,000 feet or higher. The snow that falls and collects on these peaks and the lower summits in between is a source of water for much of the United States. The snowpack on eastern side of the Rockies melts and drains to the Mississippi River. On the western side, the snow melts and flows to the Colorado River which winds through Colorado, Arizona, and California. I have spent much of my life backpacking along the Continental Divide and have pitched my tent beside countless lakes, rivers, streams, and springs. These primary sources of water are sacred to me. I have grown to love the intimate and human scale of the small creeks and cascades that I encounter during my wilderness travels. While I love the grand landscapes of two of the great painters of the West, Albert Bierstadt and Thomas Cole, I find their god-like view of the landscapes depict an expression of human dominance, instead of dependence. The grand landscape is an illusion and undermines the dependence we humans have on clean water. I want to paint intimate landscapes that are life-size to capture the feeling I have of being in the landscape and dependent on it as opposed to superior to or dominant of it.. I want to communicate and celebrate water as a fundamental necessity for life while describing its beauty, fragility, and ethereal nature. All of my paintings are rivers and steams that I have hiked to, and in most cases pitched a tent near and drank from. These painting serve as memories and a record of my reverence of sacred waters.”

I was born in Whittier, California and attended elementary school in Compton, California. As early as I can remember I have been profoundly fascinated by drawing and painting. During middle school my parents moved to Fountain Valley. When I attended Fountain Valley High School, I took as many art classes as I could. Through a chance encounter, at the beginning of my Sophomore year, I became involved in backpacking. During the summer of 1970, I joined four fellow students and our club sponsor to spend two months backpacking the length of the Sierra Nevada Mountain Range, from Lake San Isabella to Lake Tahoe. We followed the John  Muir and the Theodore Salomon Trails. After that I became an avid backpacker and spent most of my weekends and summers in the mountains of California. In 1973, I took a gap year between high school and college and spent five months backpacking from Mexico to Canada along the Pacific Crest Trail with our sponsor and three other hikers my age. I was eighteen. The experience would profoundly change my life.

On the adventure, I decided to major in art and pursue a teaching degree. I attended Humboldt State University, majored in art and attended graduate school to earn a teaching license. I graduated in 1980 and moved to Colorado to take a job as a wilderness instructor with the New Mexico Department of Juvenile Corrections. I worked the first half of every month and spent the second half making art in the small town of Cokedale, which, coincidentally, I would later learn was built as company town by the Guggenheim Family. I purchased a building there called the Old Bathhouse and used it as my studio. In 1988 I left my wilderness work in New Mexico and took a year off to focus on my art making. I build a series of very large steel frame sculptures”