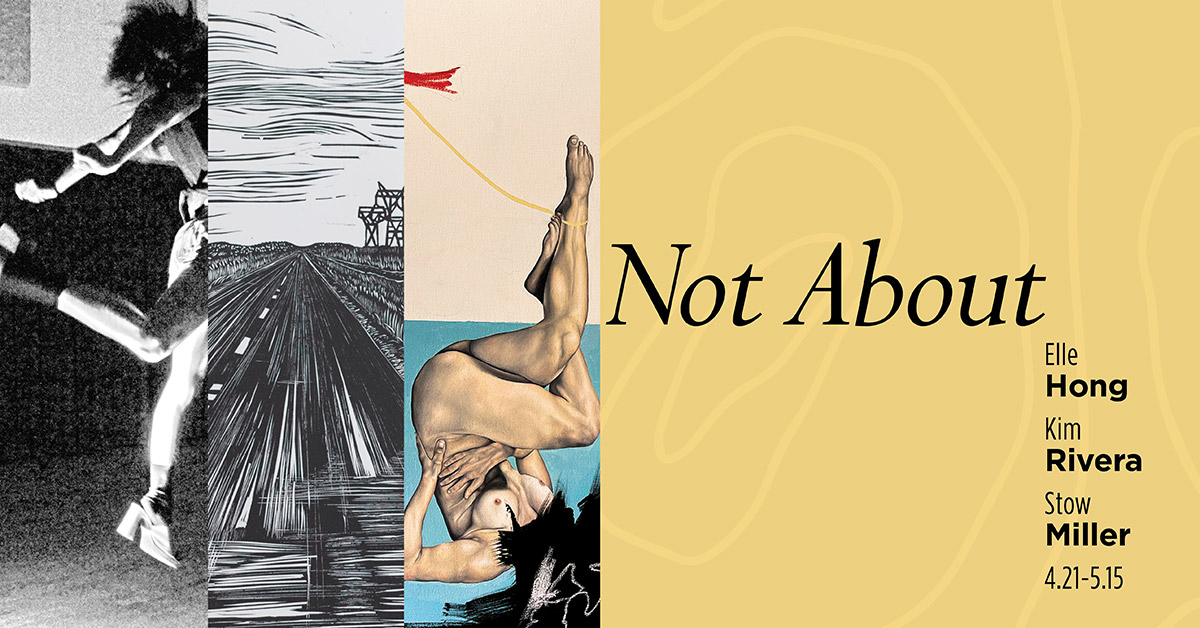 Art Gym Gallery is excited to presented this year’s Create Award residency exhibition, Not About. The show will combine the works of Elle Hong, Kim Rivera, and Stow Miller, working in performance, printmaking, and painting. The works on display will demonstrate the ways in which their art practice has evolved throughout the Create Award residency. Join us for an opening reception on April 21 from 6-9PM.

Kim Rivera graduated from the University of Colorado Boulder in 2018 with a degree in Psychology and Art Practices with an emphasis in printmaking. As an artist, Kim desires to create work that is relational and challenges the viewer to be present with the work before them. Her work for the “Not About” exhibition is an attempt to immerse viewers into her experience walking 200 miles on the Camino de Santiago, The Way of St. James pilgrimage in Spain. Each piece serves as imagery along The Way, portraying a rich and diverse culture, terrain, and a sense of continual movement.

Stow Miller is an 23 year old emerging artist whose work attempts to explore perceptions and mindsets that are often unrecognized and/or elusive. He received his B.A. at Colorado College with an emphasis in art history and philosophy. His work is largely inspired by his studies of baroque art, post war contemporary art, and french existentialist philosophy.

The entirety of my work is reliant on the theory of The Beholder’s Share, first explained by Alois Riegl, which states: a work of art is not complete until the viewer responds to it. I believe this theory should be taken further, as to say that a work of art does not exist in and of itself, but is instead solely the dance manifest by the viewer and the work. Spawning from this idea, my work attempts to suggest narrative queues intended to help the viewer create and experience a full idea/emotion.

During my time at ArtGym I have attempted to intertwine realist and abstract elements to inspire the conception and interaction of an inner and outer world. This duality is intended to question the tangible, compare and contrast the inner and outer world, confuse what is real and what is projected, and ultimately act as a mirror. I intend this work to be an expression of craft as well as a contemporary attempt to help the viewer interact with the modern world as well as approach eternal questions.

Elle Hong (they/she) is an anti-disciplinary artist, writer, and educator from the occupied lands of the former Hawaiian Kingdom (Honolulu, HI). Currently based in Cheyenne/Ute/Arapaho/Sioux Territories (Denver, CO), they received their MFA in Choreography from the University of Colorado Boulder with a graduate certification in Emergent Technologies & Media Arts Practice. Their work spans through dance, media arts, writing, music, and pedagogy – often collaging them into hybrid performances. Elle’s work has been shown both nationally and internationally, including the Thessaloniki Queer Arts Festival (Greece), SPEKTRUM (Berlin), the Seattle Festival of Dance Improvisation (Seattle, WA), Counterpath Press (Denver, CO), and the Ezra & Cecile Zilkha Gallery (Middletown, CT). Elle is a current Create Award resident artist at Art Gym Denver, researching convergences of improvisation, mental health, and somatic techniques.