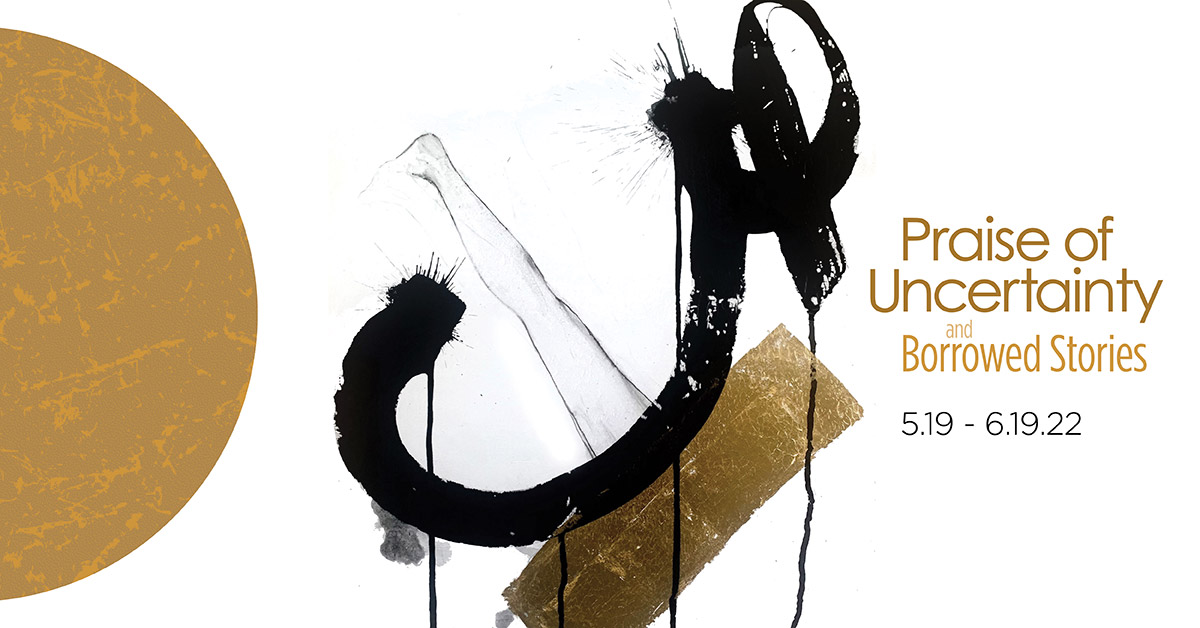 Art Gym Gallery is excited to present, Praise of Uncertainty, featuring new work from Boulder based artist Belgin Yucelen. Belgin will also be debuting a new short film entitled Borrowed Stories. Please join us for an opening reception on Thursday May 19 from 6-9PM.

The artworks that I created for this exhibition remain true to my desire to create with simplicity and ambiguity.  I allowed for empty spaces which create an uncertainty that inspires seeking our own stories. An openness to uncertainty in any conversation leads to endless possibilities and new meanings.  In Noh theater, for example, a pause gives space for an inner rehearsal and imagination similar to silence in music. I created forms with a sense of refinement of the Japanese aesthetics that dissolve into these spaces. The Islamic sense of calligraphic brushwork I rendered vertically similar to Asian scripts are love poems written by Arabic women contradicting the traditional Islamic calligraphy. The mere presence of such inscriptions deliver powerful messages even if they are not legible. I am interested in this power as well as their seductive aesthetics.  Silences, disappearing figures, and the scripts hold a space that suggests a mysterious mood that isn’t to be described, but to be felt.

It is a pity for that body to be covered

It is injustice for that face to be veiled

When night falls, anticipate me visiting you.
For I believe night is the best keeper of secrets.
I feel a love for you that if the sun had it, it would not shine,
nor the moon rise, nor the stars begin their nightly journey

Shall I visit you or shall you visit me

As I travel north and east and pass through towns with foggy windows each with its own happenings, I borrow stories. Happenings on an ordinary evening we witness from these windows allude to these stories.

lives strange as they are

beg me to borrow their tales

in strange towns I pass

Creating is a sacred call for me, a responsibility to peruse myself, to communicate my inner-self and evoke a form of consciousness.

The process of art making is a revelation for knowing who I am. To make sense of a feeling, I search for forms. From these forms, I create imaginary worlds that help conjure unrealized possibilities. When the viewer recognizes her own experiences in these imaginary worlds I create, my art becomes a sense making tool as encountering feelings and experiences similar to ours validates them.

I can only create the view from my own window manifested by my hands. With each story I tell, or feeling I express, I aim to start a communication through which I meet with my viewer, and other viewers meet within the space only art can create, dissolving the separation between us, and across time, distances and cultures.

In many aspects of my life, including objects I own, words I use, and my art, I aim to assume meaning with less. In my artmaking, I use a soft voice, almost an understatement with silences, and pauses which create spaces of ambiguity where the viewer can escape from the limitations and complexities of a well-defined subject. By presenting a mere hint of the story, I evaluate the possibility of art to provoke seeking for emotions. Through the act of revealing or concealing, similar to a fenced garden which partly obstructs the view, the viewer stays longer to find out what is hidden behind. This also empowers the viewer to imagine and make their own aesthetic choices and personal interpretations.