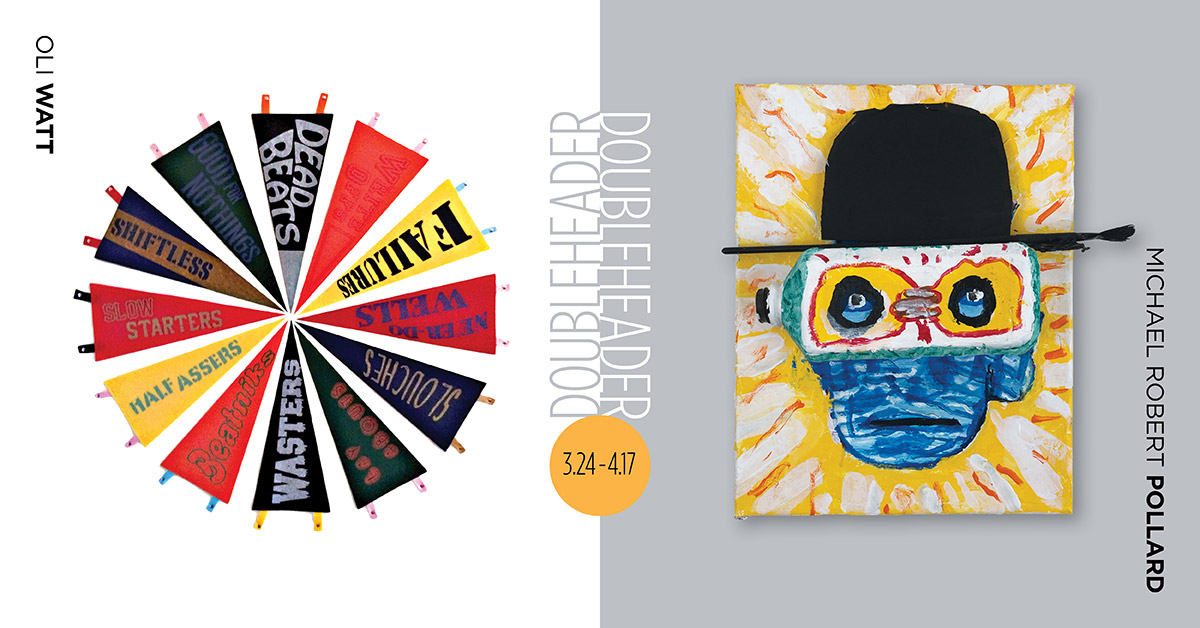 Art Gym is excited to present, Double Header, with work from Chicago artists Oli Watt and Michael Robert Pollard, showing in the Common Space Gallery. Please Join us for an opening reception on March 24 from 5-8PM.

Oli Watt lives and works in Chicago. He currently serves as Associate Professor at the School of the Art Institute of Chicago where he teaches in the Printmedia Department. Oli has shown his work nationally and internationally including exhibitions at the Museum of Contemporary Art in Chicago, Brooklyn Museum of Art, Spencer Brownstone Gallery in NYC, the International Center of Graphic Art in Slovenia, MI, La Band Art Gallery in Los Angeles and Rocket Gallery in London. His work has been discussed in numerous publications including Art on Paper, Art US, the New Art Examiner and Village Voice. He runs free range gallery and project space in Chicago’s Albany Park neighborhood.

“When I watch movies and cartoons, listen to song lyrics, or read novels, I tend to gravitate toward the pivotal objects that support an overall narrative, but are eventually left behind as new elements are introduced to the story. I often recreate these objects as prints and multiples so they may physically exist in actual situations. Sometimes, the pieces are made as exact replicas of the fictional originals, sometimes they are simply inspired by the narrative, and occasionally they are purely invented. As a result, most of the projects tend to walk a tenuous line between actual authoritarian object and uncomfortable, sometimes humorous prop.”

On display in the gallery will be Watt’s Pennants, a collection of flags appropriating forms from American sports culture used to support the notion of “winners”.Inspired by a combination of rock music lyrics, literary and film characters, as well as recent political rhetoric, the Pennants series recognizes the important individuals who constitute the other side of social constructions defined as successful.

Michael Robert Pollard was born in Queens NY in 1970, raised in NYC, Tucson, Arizona, and the San Francisco Bay Area. Pollard attended the San Francisco Art Institute and graduated with honors in 1997 with a BFA in Painting and Drawing. Pollard has resided in Chicago, IL in 2004. A good art and baseball town. Pollard’s work has been shown across the United States. Partnering with Free Range, Center for Contemporary Arts, Sacramento, Third Coast Comics, Roman Susan, Vuseuvios, South Side Suburban College, Mess Hall, Community College of Rhode Island, and Sierra College.