The Designers for Glaser poster exhibition represents a very fortunate collaborative resolution to many difficult international circumstances brought about by the global Covid-19 pandemic. Organizers of the Colorado International Invitational Poster Exhibition (CIIPE) and the Biennial of the Poster Bolivia (BICeBé) were faced with the problems of cancellations, postponements, and rescheduling required by the international measures restricting travel and assembly.

The CIIPE committee decided on the cancellation of satellite exhibitions that were in development and a resetting of our biennial exhibition sequence to begin again in September 2022 with the postponed 22nd show. We were considering an alternate exhibition of posters gathered from our extensive collections at hand. In the meantime, Milton Glaser passed away at age 91. The loss of the great master inspired our counterparts in Bolivia to organize an appreciation of his legacy with an online exhibition of international poster designers’ personal design tributes to his memory. After discussions, the two organizations agreed that a partner effort to include a hanging show in the Hatton Gallery at Colorado State University would benefit our combined audiences very well. It seemed a natural fit that Colorado could complement the Bolivian online presentation with a printed showing of the wonderful work.

Designers for Glaser is a living tribute not only to Milton’s innovative poster work over many years but he was also a seminal creative force in all manner of international visual communications. He was clever, insightful, mischievous, funny, and thoughtful wherever he found the opportunities. These posters recognize his gifts and contributions with gratitude.

Every two years since 1982 I have ventured back to my alma mater, CSU, to see the international poster exhibit that was co-founded by my favorite graphic design professor Phil Risbeck.  Over the years It’s been educating to learn, thru posters, how designers communicate the culture and politics of the times.  Color and graphic shapes can almost be a brand indicating where a poster is from but the communication of those same posters remains universal.

This year, as a consequence of COVID, the poster show was different. Designers from 29 countries were asked to pay homage to American graphic designer Milton Glaser, who designed the “I Love New York” logo and the psychedelic Bob Dylan poster and was the first graphic designer to receive the National Medal of the Arts award from President Obama. I saw 85 graphic works in one place about one subject matter that still communicated universally but stayed true to the many countries the designers were from.  References to both the “I Love New York” logo, the Bob Dylan poster, a pencil, and headline typefonts made up the majority of the posters with posters from Japan and Iran standing out as unique.

This year I didn’t attend the opening of the exhibition but instead went alone one afternoon.  I was the only one in the gallery and found that I missed the excitement of an opening and over-hearing the comments or watching the reactions that folks had about each poster.  Being alone did give me the opportunity to enjoy a video on Glaser that provided my biggest takeaway from the exhibit… Glaser stated that the definition of art is “communication with delight”. That’s a definition that feels both self-satisfying and community-minded.

Explore and Discover with Landmark Exhibit 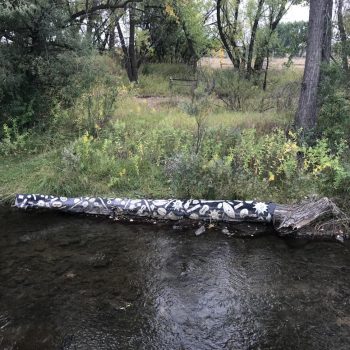